Sun, Earth And Surf In Sinaloa 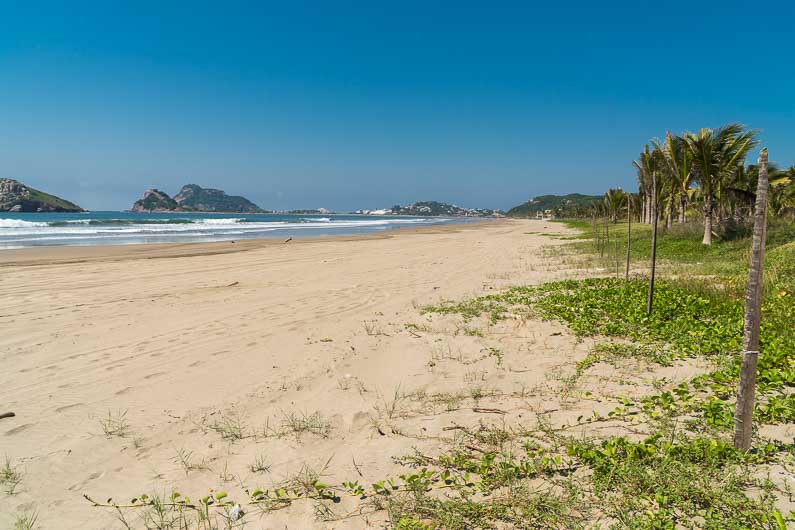 Sun, Earth And Surf In Sinaloa

Words are elusive when trying to describe the people and vibe of this Mexican state. Sun, Earth, and Surf in Sinaloa is a quintessential guide to living at a slower pace and going full speed all in the same breath.

When It Rains It Shines?

I cover my ears as the brakes of El Chepe screech against the cold rolled steel. Creeping along the rails just outside the Los Mochis train station. It is ten at night, and the moon is nowhere to be found. With my gear slung over me, I stand on a barely lit platform, phone in hand frantically trying to find a signal.

I am to meet my couch surfing host Eduardo, but due to my ‘supposed’ world sim card not working, I am forced to walk a dark street filled with potholes and mangy dogs. I grab an overpriced taxi to a Best Western that blows away my weekly budget in one night. As it turns out, he was about three minutes from the train station. I could have walked there.

I finally get a wifi signal, and I am able to contact Eduardo. It was my first couch surfing gig, so I had no idea what to expect. He asked if I wanted to go on a hike with him and some friends at seven in the morning. Looking at my clothes strung about the room, still wet from the recent sink wash, I reluctantly said, “absolutely.” It would be a decision that I would not come to regret. 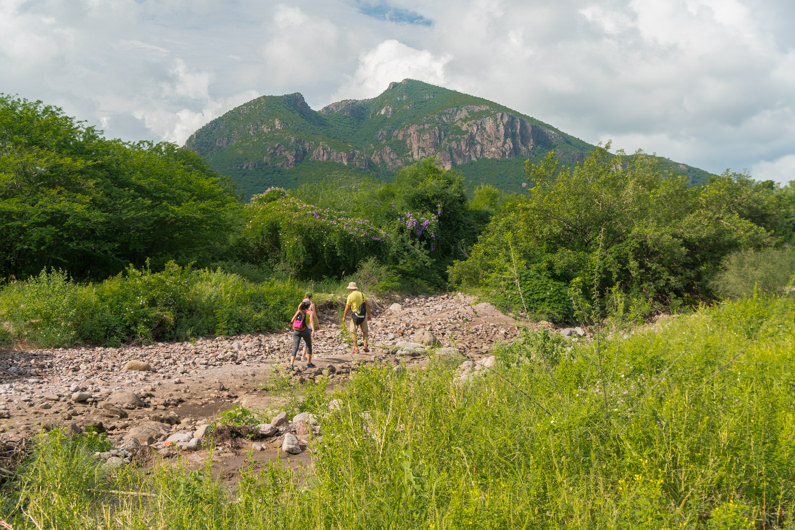 The sun was high in the sky as we made our way into one of the many canyons of the Sierra Madre. Sweat ran down my face as I swatted away mosquitos who seemed frantic for blood. We army crawled under a rickety barbed wire fence and through tall sharp grass then worked our way up the dry river bed. We talked about the state of affairs in Mexico and our collective fears and disappointments of a potential Trump presidency.

Mid-debate we ran into someone who would be a source of inspiration for surviving our long trek through the Mexican desert. 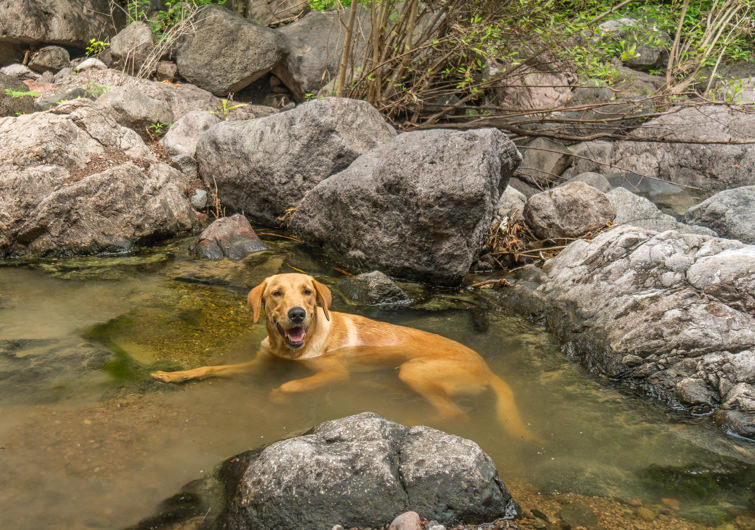 Meet Lalo. He was just hanging out on the river bed in a pool of water taking a break from the heat. He surprised us at every turn with his rock climbing skills and ability to sniff out a trail. 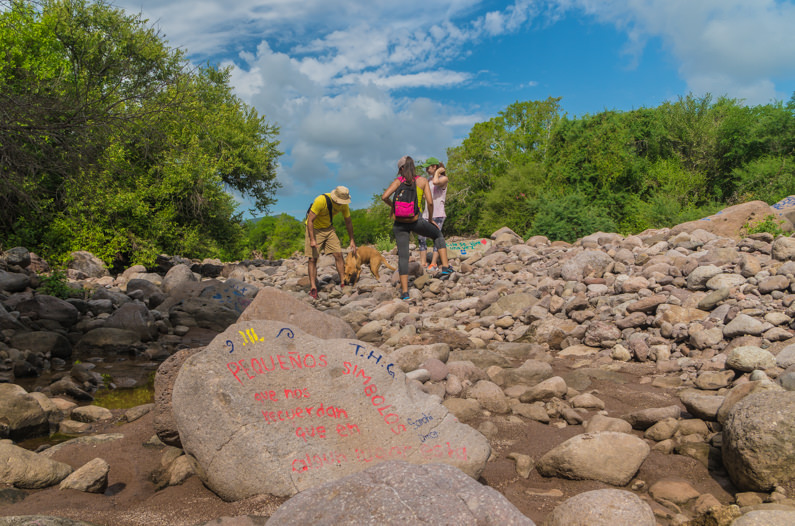 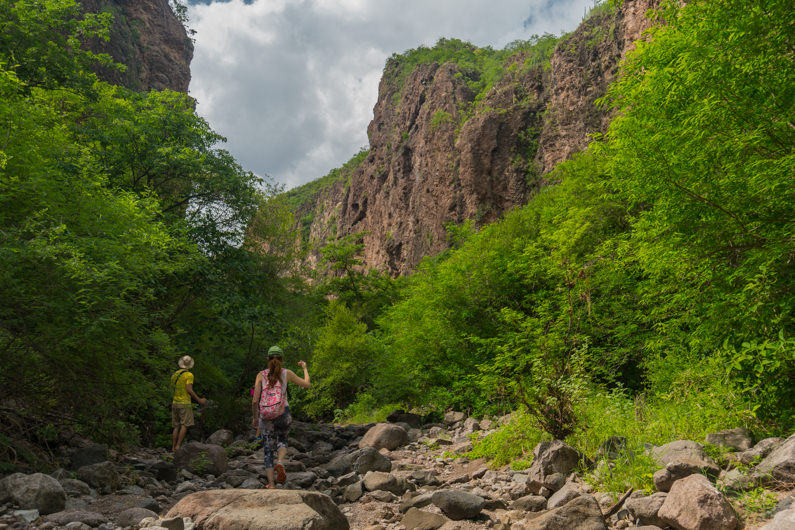 Lead by Lalo; we furthered into the canyon, the walls getting higher and the humidity rising steeply. Our destination, a swimming hole at the end of the canyon.

After about an hour of hiking, we finally arrived at a small shady spot with vines hanging down and windy trees that seemed to grow straight from the rock below. 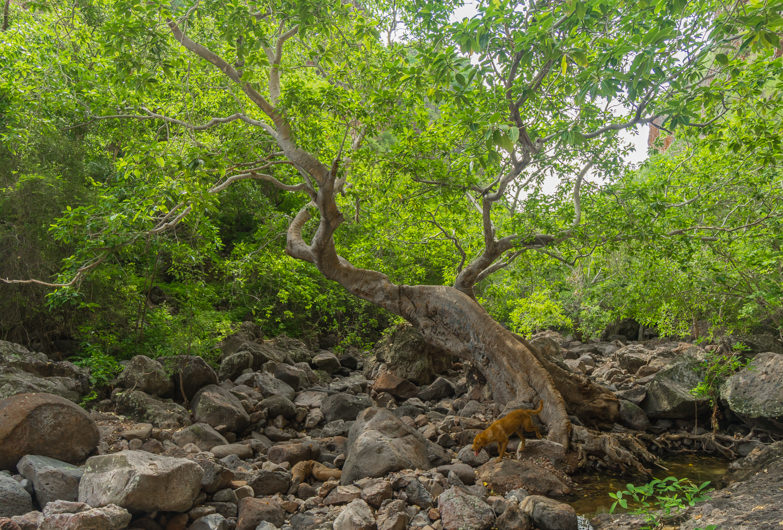 We spent the next hour just enjoying the reward of a long HOT and challenging hike. Eduardo and I did some swimming in some very questionable waters, and the girls caught some sun. We then proceeded to talk about politics, religion and the things that we didn’t fully understand about each other’s cultures.

The hike out was just as hot and mosquito-ridden as the way in. We emerged from the dense vegetation and climbed back in the little white Nissan Sentra, but not before cutting up a water bottle for Lalo to drink out of. I have never had much sympathy for humans; I don’t know why I just never have. Animals are a whole different story. Coming from the States where strays are cared for in shelters, it hits me right in the feels when I see stray dogs and cats with ribs showing and tears in their eyes, knowing that I can do nothing about it.

So we tied up the fence and went on our way, all the while looking in the rearview mirror trying not to tear up. Not every moment of travel is a happy one.

My host Eduardo was kind enough to let me crash at his place for a week. During which time I got to meet some of his close friends. Almost every night I found myself sitting around a small computer screen watching alternative new age Mexican music and talking about everything like life, love, and politics.

One of them even asked me if I wanted to come check out his farming operation and learn more about Sinaloa agriculture. I responded the only way I know how. Hell yeah! 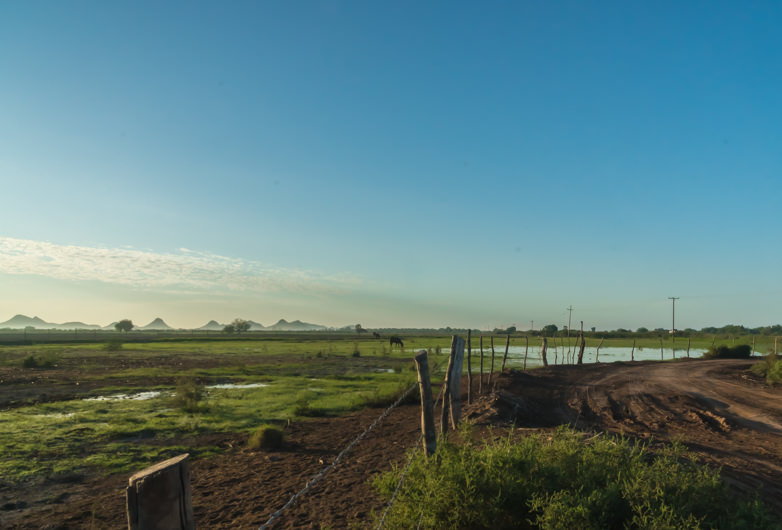 It was 6 AM as I leaned out of bed suddenly realizing that I had slept right through my alarm. I was supposed to be outside ten minutes ago. I threw on the nearest set of clothes, grabbed my camera and ran out the door pouring water on my face as I tripped down the stairs.

Thankfully my ride was having the same kind of morning. Once he arrived, I hopped in, and we drove out of town about forty minutes north where we grabbed some grub from a local woman that was out of this world delicious, then proceeded off-road towards his land. 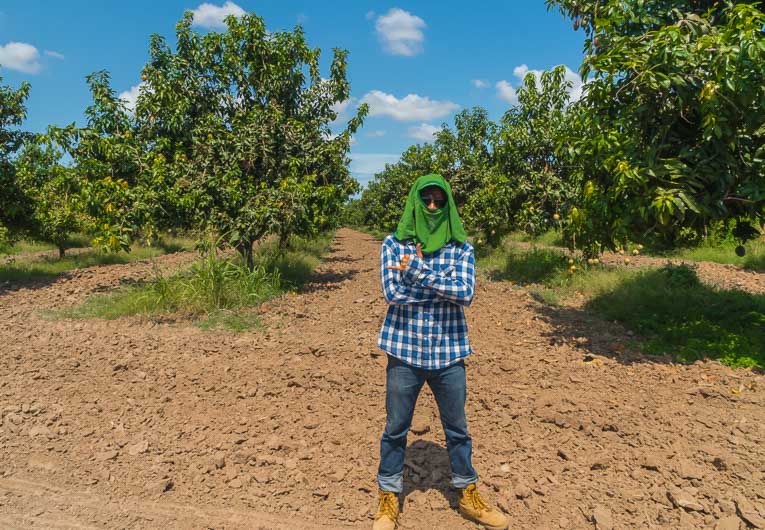 Meet Jesus Martin, a second-generation mango, lime and sometimes corn farmer. He grew up working his father’s land and then went to college in the States to study agriculture. He now oversees hundreds of hectares of mangos and limes.

If you’re wondering what the heck is a hectare? Well, one hectare equals right at about 2.47 acres. So just imagine managing all of that land sometimes all by yourself. Yikes! 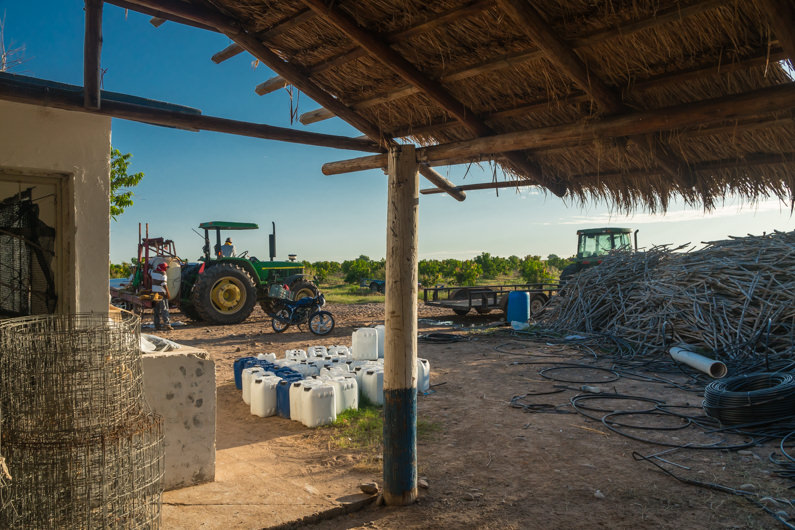 Being so close to the ocean, much of the soil on Jesus’s land consists of salt filled sandy soil. Which typically would be a farmer’s worst nightmare. Fortunately for Jesus, mangos and limes thrive in these conditions, and he has seen massive growth in yield from year to year. 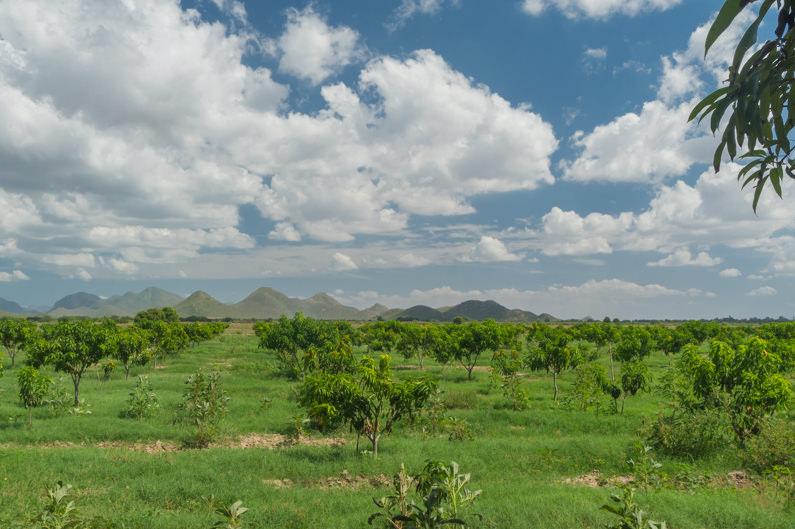 There are a dozen men and women working for Jesus. They have the daunting task of spraying pesticide to keep the never-ending weed growth at bay, and it is not a very high tech system either. I could watch these guys for days, sitting stretched out along a welded beam on the back of tractor just spraying away.

The women have the job of installing sturdy sticks next to the lime plants to keep them upright. They have recently been working on establishing a new type of irrigation system that will save them tons of water each month by delivering water directly to the plant base. 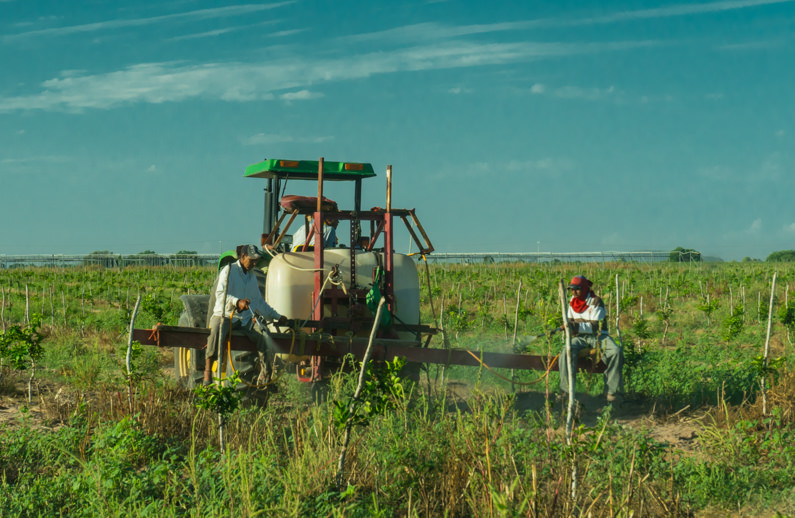 While being the boss means lots of headache with the paperwork required by the government and late nights contemplating your next move. It also has its perks. Such perks include taking a lazy Monday and driving to the beach to drink some cervezas and just enjoying the warm salty air against your face. 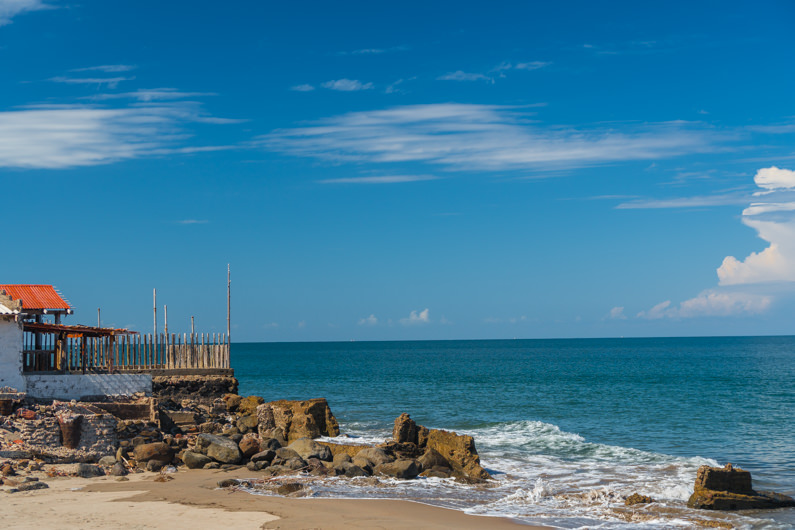 It is pretty hard to imagine that a guy from the middle of the United States has never surfed before, I know. Up until a week ago, I was strictly a land mammal. I have been to the ocean plenty of times, but that usually consisted of me dipping my feet in the water and moving on. I was pretty excited to finally try riding some waves and I could not have had a better set of teachers to show me how it’s done. 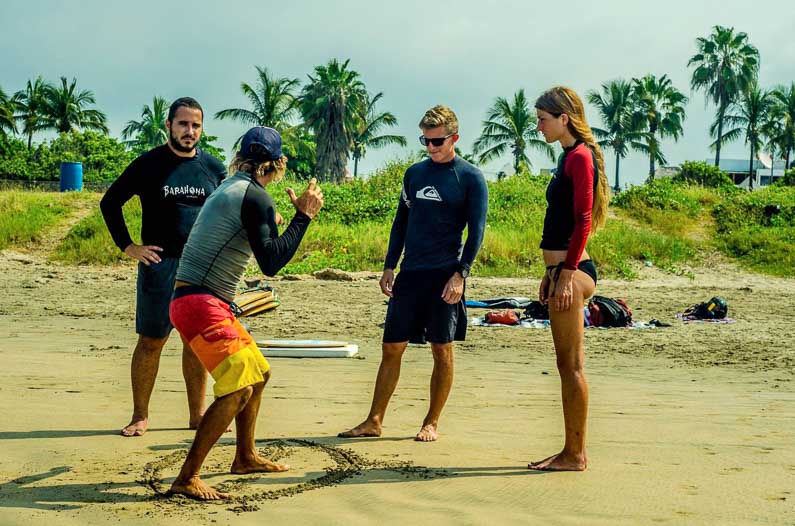 We started with the basics. Drawing lines in the sand in the shape of a surfboard and practicing our pop-up. Our main instructor Javier is a pro surfer for Quicksilver and teaches classes to all ages in Mazatlan. He might be the nicest most upbeat person I’ve ever met.

I even lasted fifteen seconds balancing on the indoor balance board. A board atop a wooden roller that helps give you an idea how balancing on water will be. I was promised cookies during my next lesson. I might have to take him up on that. 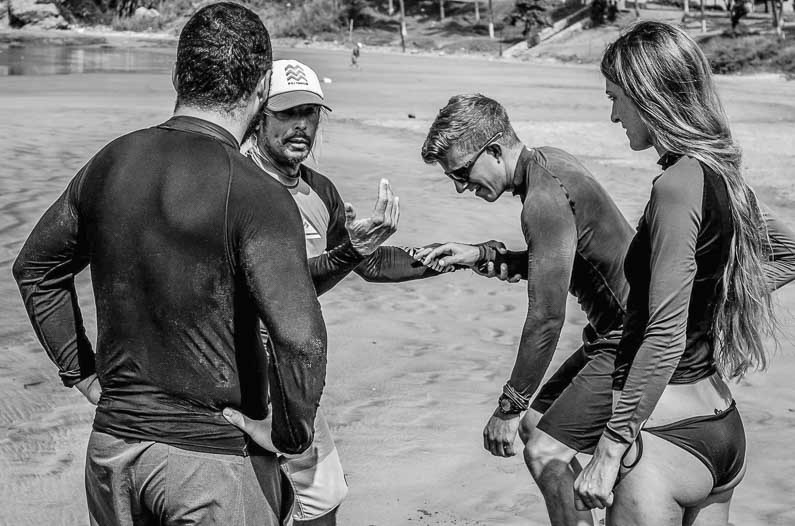 The next few hours we battled breaking waves, paddling as hard as we could trying to pop-up and ride it to shore. Javier and Tomek, one of the managers at Funky Monkey Hostel, tried their best to keep us afloat. Just as I was getting the hang of it another wave came crashing down ripping the board from my grasp. Reminding me that I needed a lot more practice.

My entire nasal cavity packed with salt and my eyes burning I couldn’t help but smile as I watched my classmates slowly rise from the water and ride their boards into shore. 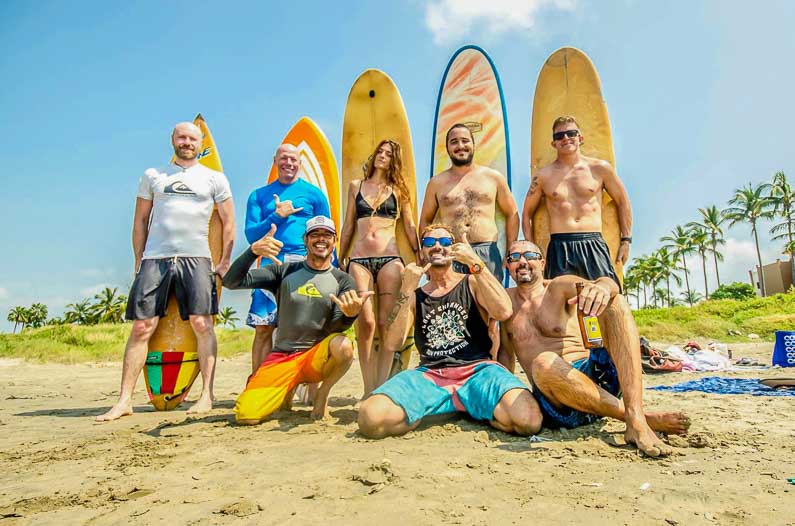 One by one we dragged our feet and our boards up the beach, took some big swigs of water and posed for a group photo. I had a blast the entire time. Although for now, I might stick to being a land mammal.

There is no doubt that my time in Sinaloa Mexico will be engraved in my mind for the rest of my life!

Pro Tip: Stay at the Funky Monkey Hostel when visiting Mazatlan. It is by far the best hostel I have ever been to. I was originally going to stay for four days and ended up staying for two weeks. Tell them Grant sent you! 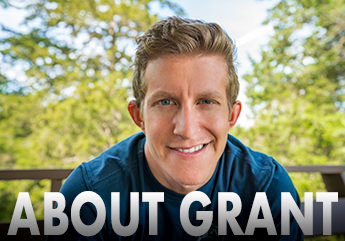